A cultural and coaching trip to Nigeria

Efe Sodje is a Nigerian International making 12 appearances, including playing against Argentina and England in the 2002 World Cup. He has had a long and illustrious career in professional football. Playing over 600 games for 11 clubs  games in England. He is currently assistant Manager for Macclesfield Town in the Conference National.

Efe is famous for wearing a do-rag, something he started doing in 1994 at the request of his mother. The headband often has the words “Against All Odds”. 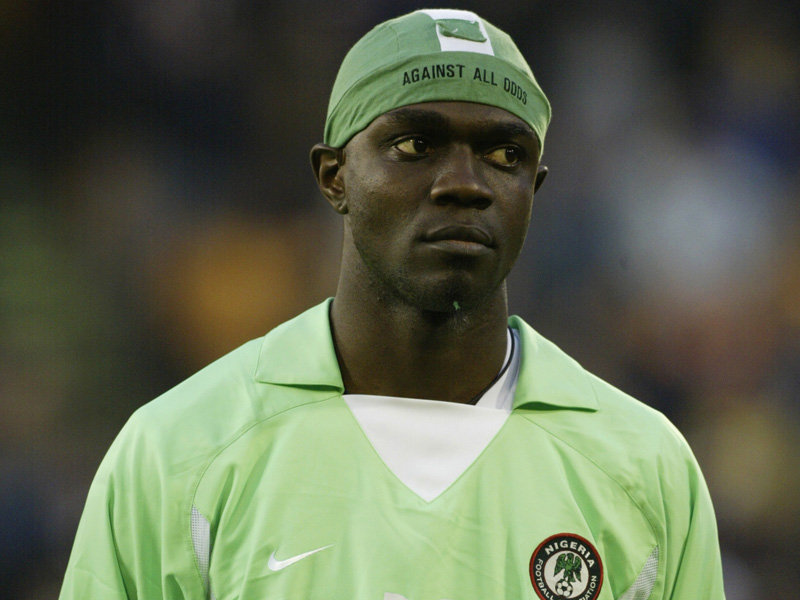 Efe, has been a friend of mine for quite a number of years. I first met him when he was playing for Nigeria prior to the 2002 World Cup. As a result of our friendship I met his brother Bright, who was once a professional Rugby League player and I actually went to Bright’s wedding in Sheffield many years ago.

It was while on a coaching course, that Efe reminded me of my trip to Nigeria in 2003. Efe and his family are very well connected in Nigeria, in particular the Delta State. The reason for the trip was to meet the Sports Minister for the Delta State, with a view of bringing to Europe, for both Football and Education reasons, the best young players from the Delta State. I also wanted the opportunity to watch and see for myself how good the young players were in Nigeria.

So along with Bright, I flew to Nigeria. Not really knowing much about Nigeria, I was very much relying on Bright to guide me through the trip. The flight was good. Lagos airport was very hot, humid, packed with people beyond belief and absolutely chaotic. Welcome to Nigeria smiled Bright, as we waited two hours for our bags to appear!

Eventually we got in a car to drive through Lagos to our hotel. Bright sat in the front, with his mate who was driving. To be honest, I was expecting a half decent car. Maybe even air conditioning, given the heat and humidity. But, this car wasn’t it! Its most redeeming feature were its four wheels and engine.

Off we set, me in the back, Bright and his mate in the front. It was now dark and Bright immediately worried me when he said, “we shouldn’t really be driving through Lagos in the dark!”

Fortunately the darkness of the night was illuminated by the many street fires that seemed to litter the roads of Lagos!! The dense traffic also eased, so that we now made a least 10 miles an hour, when we moved!

On one of our frequent becalmed moments, I heard a metallic tapping on the rear window. I looked up to see the smiling, polite face of a Nigerian Policeman tapping on the back seat window, with the metallic end of his rifle!

The quite in the front of the car was by now deafening. So with great difficulty, given the antiquity of the car, I wound down the window.

“Hello sir” says the policemen to me, “hello says I” , trying not to stare at his rifle.

“Do you have a license for the radio in your car”, he prompts. Ahhh, the penny drops for me. So perhaps a bit unwisely, I play along a bit. “The car hasn’t got a radio” I reply. At which point Bright turns on a radio in the front of the car! Cleverly providing the guidance I had been seeking.

“Sorry, I don’t have a license for the radio, how can I get one”?

“You can buy one from me” the policeman offers, still with the rifle in his hand. “How much does one cost” I enquire. “only 5 US dollars” he says. “Cash” he adds.

That was lucky, I think to myself, as my credit card is in my bag in the boot!