One long pass and the opposition are suddenly straight through and score. It drives football coaches mad.

This situation happens so often at Grassroots and indeed at the highest level. Remember England in the 2010 and 2014 World Cups? 2010, Germany. German GK kicks the ball long,  John Terry misses the header, Upson and Johnson fail to get round on the cover.  David James the GK does the fandango and we’re 1 – 0 down and we’re on our way home.  2014 v Uruguay. GK kicks the ball long. Stevie Gerrard Phil Jagielka get in a tangle and Gerrard flicks it on and Cahill and Baines fail to get round on the cover, Luis Suarez nips in, 2 – 1 and we’re going home again! It is so frustrating and also so avoidable with some simple coaching work with your players.

Statistically, the vast majority of goals are scored in the space between the width of the 6 yard box and 20 yards out. For most Grassroots football teams, to play more than 3 passes to get the ball and a player into this area to score, happens rarely and if it does, fair enough to the opposition.

But, one pass or long kick and a runner into this area is easily achieved by any team. A very simple, but effective attacking tactic. Yet, how many times do we see goals scored via this tactic. All the time!

So how can we coach our players to minimise this risk in a game and concede far fewer goals? 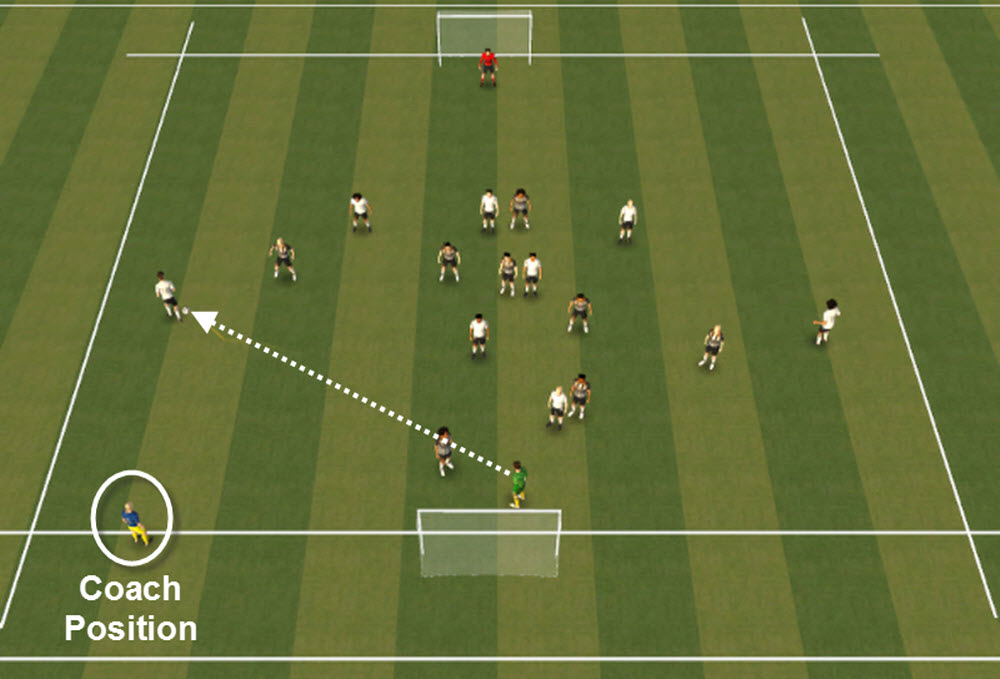 When Diego Simeone the Atletico Madrid Coach was asked how his team managed to beat Barcelona so often, his reply was “they control the ball, we control the space”

What does that mean to a football coach? It means that they don’t worry about where the ball is, they worry about where it is going, particularly defending that key space between the width of the 6 yard box and 20 yards out. So they coach players to drop early into that space and therefore control it.

So, how can we do this as grassroots football coaches?

How you can effectively coach and improve your team defending the one killer ball.

In my view, the best way is in a game. But, give the players in the game a scenario such as “there are 10 minutes left, the score is 0 – 0 and if either team doesn’t score, then you’re both out of the competition and go home”

The coaches observation and therefore ability to help the players defensively now becomes key. Position yourself of the pitch and where you can see all the players. Now don’t watch the ball, anticipate and watch where the ball is going to go and observe how the team react prior to the pass to defend this area and then watch to see how they attack the ball, cover round behind the ball and recover from midfield areas.