In phase 3 of Gegenpressing made simple for Grassrootscoaches, we look at how Gegenpressing is actually used by teams at the highest level and how you might use this tactic in 9 v 9 and 11 v 11 games.

Gegenpressing is a popular phrase used and it means to pressure the opposition immediately after losing possession.  For example, in a game situation,  your team have attacked and lost the ball. The opposition now have possession of the ball and instead of leaving the ball and dropping off to become organised and compact behind the ball, energetic pressure is immediately applied around the ball as an organised and co – cohesive unit. The first priority of  Gegenpressing is to try and win the ball back as quickly as possible and then counter the counter attack. The second priority is to force the opposition to make a hurried inaccurate or panicked pass, which your team can gain possession from or intercept or win and then counter attack.

So why and how do you apply this Gegenpressing tactic in grassroots football?

It isn’t just a tactic that is about counter pressing. It is also a tactic that can be used to aggressively pressure the opposition when they have the  ball. But, it can be a high risk strategy. If the players aren’t fit, committed, organised and don’t work as a unit then it can be disastrous, allowing the opposition easy escape routes that take out and leave the wrong side of the ball the swarming pack and give the opposition the opportunity to attack with space. So it is a tactic that needs lots of work on in training.

The players need to understand and act quickly, decisively and as an organised group on the triggers to press the ball aggressively and as a pack or swarm of players. 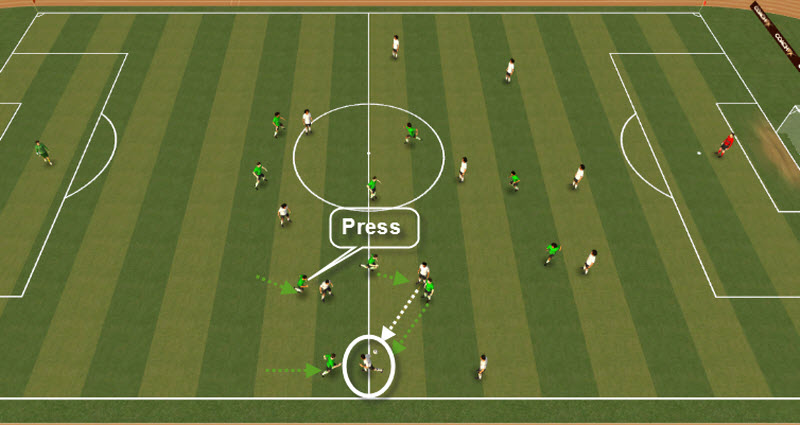 The first trigger is that the team recognise that they have enough players in close vicinity of the ball to be able to press the ball. It is no good trying to press if your team all over the place and spread out, it won’t work. You need to have a least 3 to 5 players close, or able to very quickly get close enough to the ball to be able to immediately press and swarm around the ball.

Secondly, the players who are not involved in the pack pressing around the ball, recognise and act out their roles, which are essentially to ensure that one long kick from one of the opposition players being pressed does not end up going over the top of the remaining defenders into space for a runner to get behind the defence and in on goal. They also have to be in a position to potentially win or intercept a panicked pass which results from the counter pressure which will gain them possession with the opportunity of springing a counter attack of their own. 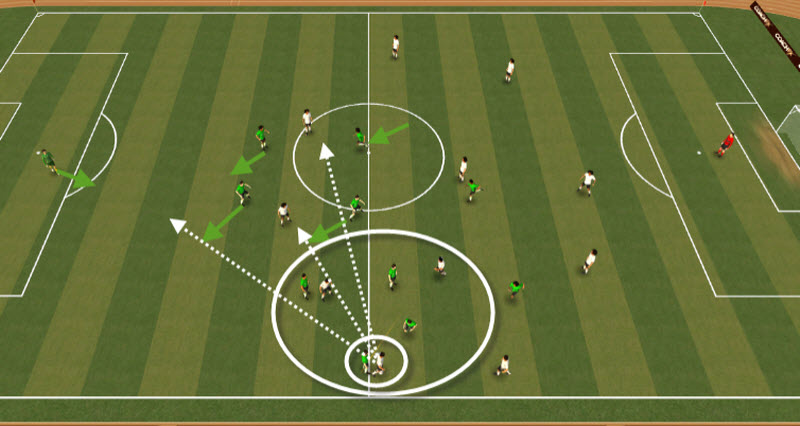 Thirdly, any players that are the wrong side of the ball being pressed, recover immediately and quickly, either to join the pressing swarm or to recover goal side of the ball and be in a position to be one of the covering, interceptor players. 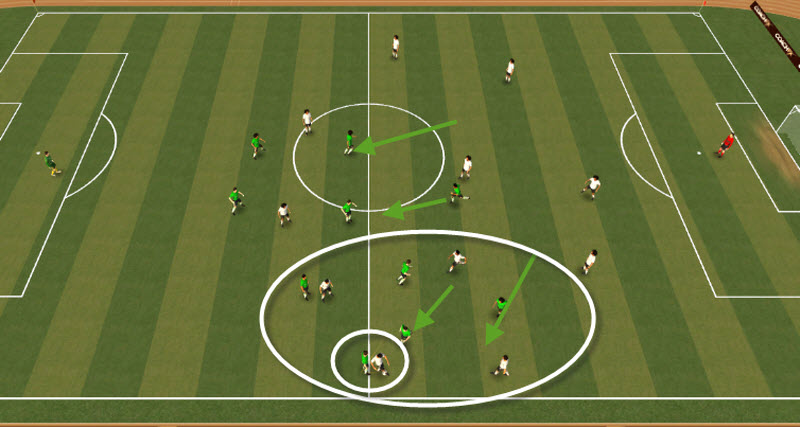 Once these triggers have been recognised, they need to be acted upon.