Pass and move in threes

Good players play with their heads up. They are aware of where the space is on the pitch, where their players are, where the opposition are. They know what they want to do next with the ball, they have pictures in their heads. They play one, sometimes two or three steps ahead of everyone else.

To start to develop this “spatial awareness” in players, football coaches have to encourage players to play with their heads up. The football brain needs information to be able to make the correct decisions and execute those decisions in a correct technical fashion. For example, when a ball is passed to a receiving player, the receiving player, to be able to make a good decision on controlling the ball or passing the ball first time, will need to know what is around them, who is available to receive the next pass. The best way for the football brain to get that information is for the player to have their head up and be able to see “the picture” of what are the best options of what to do next. If they decide to control the ball and then pass, they will need to know the best direction to control the pass and to picture the player they are going to pass to, both before receiving the ball and before the pass itself. These visual pictures will then enable them to decide on where and how to control the ball and the technique, accuracy and weight of the pass they need to make.

Therefore football practices that encourage players to play with their heads up, to be aware of what is happening around them, will improve this “spatial awareness” and develop them as players.

A very good football practice to develop and improve “spatial awareness” is “Pass and move in threes” For the players to be able to successfully pass and move in groups of threes, when other groups of threes are playing in the same area, will force players to play with their heads up and be aware of where their team mates are, where there is space, where the next target gates are and where other players are. 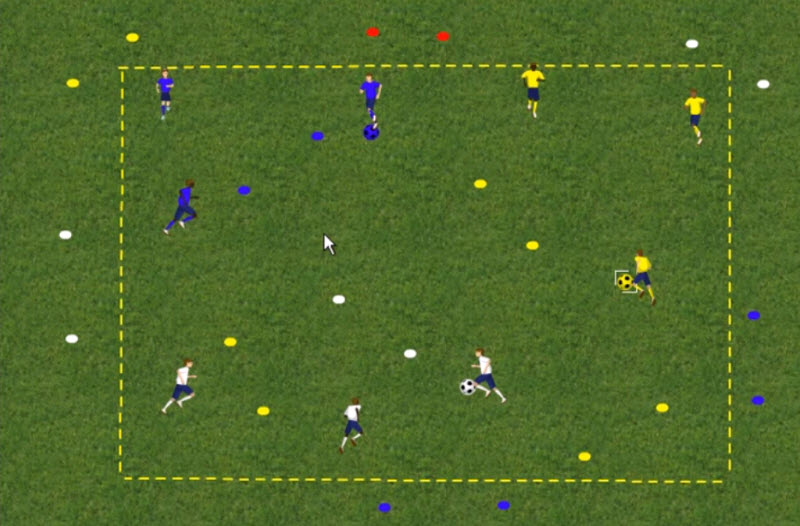 Early, clear and concise communication, both verbally and with hand gestures between the players will also help players succeed when performing this football practice.

To make this practice easier, make the area bigger, so the players have more time and space.

To make the practice harder, make the area smaller, add a group so there are 4 or 5 groups playing and add a couple of defenders to get in the way and win or intercept passes.