A must for all football fans. There are some great stadiums in England, but surprisingly only one makes the list of the top 10 biggest club stadiums in Europe.

Widely known for its exterior of inflated ETFE plastic panels, it is the first stadium in the world with a full color-changing color exterior. The two professional Munich football club Munich and TSV 1860 München and FC Bayern play their home games here.

The stadium was open in October 2012 and cost E340 milliion 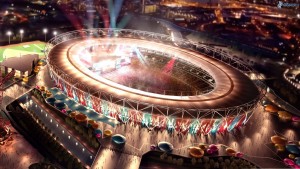 The Stadio Olimpico is the main and largest sports facility of Rome, Italy. It is located within the Foro Italico sports complex, north of the city. The Stadio Olimpico is the home stadium of Serie A clubs Lazio and Roma and also hosts the Coppa Italia final. Originally built in 1932, It was rebuilt for the 1990 FIFA World Cup and it hosted the tournament final. The stadium last underwent a refurbishment in 2007 to keep it eligible to host future Champions League finals. This included, among others, the replacement of all seats. 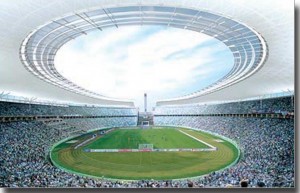 It was originally built for the 1936 Summer Olympics by Werner March. During the Olympics the record attendance was thought to be over 100,000.

After renovations in 2004, at a cost of E247 million, the Olympiastadion offers a permanent capacity of 74,228 seats and is the largest stadium in Germany for international football matches. Olympiastadion is a UEFA category four stadium and one of the world’s most prestigious venues for sporting and entertainment events. 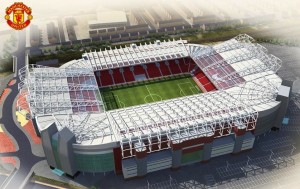 Old Trafford, nicknamed “The Theatre of Dreams” by Bobby Charlton, has been United’s home ground since 1910, when the cost of construction was £90,000. From 1941 to 1949, the club shared Maine Road with local rivals Manchester City as a result of Second World War bomb damage. Old Trafford underwent expansion in the 1990s and 2000s, including the addition of extra tiers to the North, West and East Stands, almost returning it to its original capacity of 80,000. Future expansion is likely to involve the addition of a second tier to the South Stand, which would raise the capacity to over 90,000. The stadium’s record attendance was in 1939, when 76,962 spectators watched the FA Cup semi-final between Wolverhampton Wanderers and Grimsby Town.

The stadium is named after Mustafa Kemal Atatürk, the founder and first President of the Republic of Turkey. Its construction began in 1999 and was completed in 2002. It was built for Turkey’s failed bid for the 2008 Olympic Games that were ultimately awarded to Beijing. It cost about 140 million USD to build.

With its 76,092 (all-seater) capacity and Olympic size, it was granted the “5-star sports complex” title by the UEFA in 2004, enabling it to host the finals of UEFA events. The 2005 UEFA Champions League Final between Milan and Liverpool was played at the Atatürk Olympic Stadium on 25 May 2005. The stadium is also certified by the IAAF and IOC as a first-class venue for track and field, and has hosted several European athletic competitions. 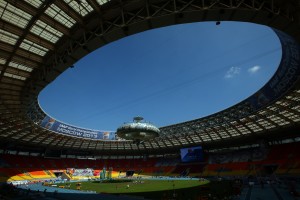 The name Luzhniki derives from the flood meadows in the bend of Moskva River where the stadium was built, translating roughly as “The Meadows”.

In the past its field was mainly used (at various times) for football games played by PFC CSKA Moscow, Torpedo Moscow, who also own the sports complex, and Spartak Moscow, but none of these teams are based there any more. Today it is mainly used as one of the home grounds of the Russian national football team. It is one of the few major European stadia to use an artificial pitch, having installed a FIFA-approved FieldTurf pitch in 2002. The pitch is necessary because regular grass pitches cannot withstand the harsh Russian winters and must be replaced at high cost. However, a temporary natural grass pitch was installed for the 2008 UEFA Champions League Final. 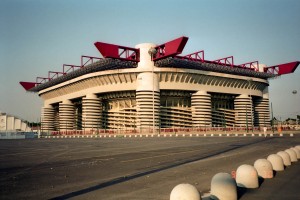 The Stadio Giuseppe Meazza, commonly known as San Siro, is a football stadium located in the San Siro district in Milan. It is the home of AC Milan and Inter Milan. It has an all-seater capacity of 81,277 making it the largest stadium in Italy. 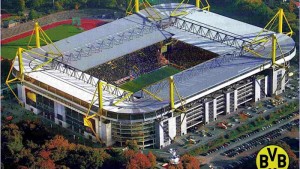 It is the home stadium of the Borussia Dortmund football team playing in the German Bundesliga. The Südtribüne (South Bank) is the largest extant terrace for standing spectators in European football; it is regularly full to its 24,454 capacity Famous for the intense atmosphere it breeds, the south terrace has been nicknamed “Yellow Wall 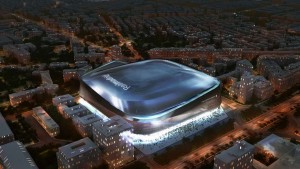 It was inaugurated on 14 December 1947 and owes it’s name to the legendary president of the club, Santiago Bernabéu Yeste. At that time, Estadio Santiago Bernabéu consisted of two uncovered tiers that could hold just over 75,000 spectators. Capacity was further increased to 125,000 in 1954, when one of the long sides got expanded with a third tier.

In its history, Estadio Santiago Bernabéu has hosted four European Cup and Champions League finals. The first final was in 1957 between Real Madrid and Fiorentina (2-0), the second in 1969 between AC Milan and Ajax (4-1), the third in 1980 between Nottingham Forest and Hamburg (1-0), and the last one in 2010 between Internazionale and Bayern Munich (2-0). 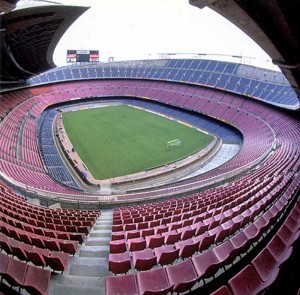 The stadium has been been the home of Futbol Club Barcelona since 1957. The construction of Camp Nou started on 28 March 1954 as Barcelona’s previous stadium, Camp de Les Corts, had no room for expansion. Although originally planned to be called “Estadi del FC Barcelona”, the more popular name “Camp Nou” was used.

Apart from hosting FC Barcelona, Camp Nou is home to the Catalan national team. The stadium is frequently used for other football events. The European Cup final between Milan and Steaua Bucureşti was held on 24 May 1989, with the Italian club winning 4–0. Camp Nou hosted part of the football competition, including the final, in the 1992 Summer Olympics. In preparation for these games, two additional tiers of seating were installed over the previous roof-line.

The facilities now include a memorabilia shop, mini-pitches for training matches, and a chapel for the players. The stadium also houses the second-most visited museum in Catalonia, FC Barcelona Museum, which receives more than 1.2 million visitors per year