The FA have produced a video which clearly explains what happens when the match officials don’t see incidents, that upon further investigation can be deemed as foul play or violent conduct by an independent  panel of three former referees who examine the evidence and decide if retrospective punishment is merited

According to Poll, it seems that referee Mike Dean and presumably his assistants and fourth Official Mike Oliver Dean missed the main incident between Costa and Koscielny – he says “given the disciplinary action he (Mike Dean) took it is safe to assume that it occurred away from his view“. If Dean missed him clawing at Koscielny’s cheek or swinging his arm into his face, he could yet face a three match ban for the incident. 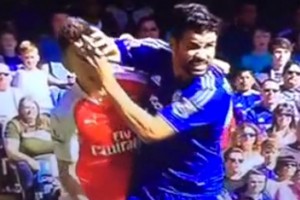 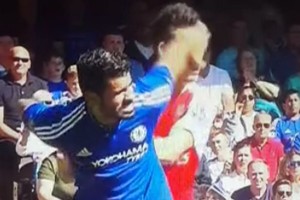 It is also reported that Diego Costa will discover on Monday whether the FA will take retrospective action for his part in the incident that led to Gabriel’s dismissal.

FA chiefs are studying controversial referee Mike Dean’s match report on the incident towards the end of the first half at Stamford Bridge before deciding whether to punish the Chelsea forward.

Costa was booked, but it has not been made clear whether it was for the incident with Laurent Koscielny or his exchange with Gabriel that led to the Arsenal defender’s red card.

So we will see whether Mike Dean did actually see the incident with Laurent Koscielny, where Costa clearly makes contact with his hands on Koscielny’s face, not once, but twice. If the referee did and either decided on no action or gave Costa a yellow card, and his match report confirms this, then Costa will escape a ban, as the independent committee cannot overrule a referee’s match report.

But, if in his match report he missed the incident with Koscielny, then I will be very surprised if Costa escapes a ban. If he does, then the FA will find themselves under very close scrutiny as there is no doubt that all the evidence points to Costa raising his hands and making contact with Koscielny’s face, not once, but twice!