How to get your strikers to score more goals

A major reason was that he played closer to the goal. He involved himself less in deeper, build up play. As a result, he got into the opposition penalty area more often, particularly into the key areas between the posts. Because he was in these areas more often, more balls were played into the area and he was in better, more advanced and key areas to get on the end of them. That wouldn’t have happened by accident, he would have worked on getting into these areas and on his finishing skills through game realistic and related training sessions.

They say strikers are born, not made. To a certain degree that is true, some players have a natural ability to score goals. But if that instinct is analysed and then the analysis is applied practically to training sessions and games, then the focus of the session has to be to get the players to play in and around the penalty area, to get them in front of the goal and to provide lots of realistic and game related goal scoring situations.

So the focus of this end to end, challenging, progressive and competitive rotating shooting game is to encourage strikers get into in these key penalty area finishing zones and to provide them with lots of passes, crosses and situations that help them to have lots and lots of chances and to then to take them. Be it individual play, turning, dribbling to shoot. Quick combination play. Creating space to control and finish. Making runs to attack crosses. Following up for miss hit shots or rebounds from the goal keeper or to react to loose balls and shoot quickly. The game will also massively help players develop a positive attitude to taking chances and to develop and improve their finishing technique, their reactions and their understanding of how to improve and develop that key strikers predatory instinct.

The video has proved very popular on You Tube, with over 221,000 views so far. Wes Staruss says “This is an offensive-oriented progression. Start with support players having to handle a ball, and play it back or around until they can play a good ball to strikers who have to quickly handle it and shoot. You only introduce pressure after the players are warmed up and ready for it. I like the change to have the outside player who first touches the ball make a pass and a run into the playing area, so you get the movement and different players involved. That’s the way progressive drills work. Once you add defenders, it gets more realistic, but you build up first. This could serve as a good training for the goal keeper who has to quickly adjust to angles, then turn to defend again”. 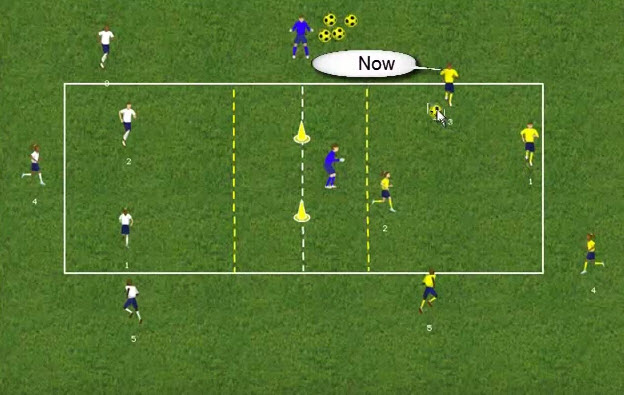 Suggested area size. 30 – 35 yards long x 15 – 20 yards wide.
Position a full size goal in the middle of the pitch with a GK. The GK keeps goal from both sides
There are two strikers in each of the areas –either side of the goal, they are the close range finishers
There are two mobile servers at each end of the pitch, there job is the field the ball and pass into the strikers to finish inside the penalty areas
There is a spare GK, with footballs on the side of the pitch by the goal. If a ball goes out of play they restart the practice by throwing the ball to the servers at either end. They also rotate with the GK in goal
If the GK saves the ball, they throw to the servers at the opposite end from the shot
If a shot goes past the goal, it goes through to the opposite servers who pass into the strikers to look to score
Play rotates end to end with lots of shots

START
Ball is served from the spare GK to the servers at one end of the field.
The servers are like midfield players on the edge of the penalty area in a game and should move to “field” any ball that comes in their direction
The servers pass the ball into the strikers and the game commences

There are a number of challenges and progression in the video

Strikers’ movement to find space and receive the ball in the area
Positive attitude and decision – can the receiving player shoot quickly and accurately
Ball in front and out of feet, to enable the head to be up and assess the GK’s position and distance / angle to goal
Decision of first time shot or control and shoot.
What are the factors that will influence this decision? Pace of the ball, height of the ball, body position – facing goal or away from goal? How much time there is?
Decision of technique of shot to use – side foot, power shot, volley.
Application of the correct finishing technique – Part of foot? Area of ball to strike? Body position?
Clever play, turning and shooting, dribble and shoot
Hit the target – accuracy over power when close to goal. Be calm and composed
Timing of movement to follow up for rebounds and make the goal big for angled shots
Finishing from crosses – timed movement to leave and attack space.
Finishing from crosses – use the pace of the ball to deflect the ball into the goal
Clever, quick, combination play and communication between strikers to create realistic finishing opportunities
Support player – angle and distance of support to try and face the goal when receiving the pass to make the shot easier